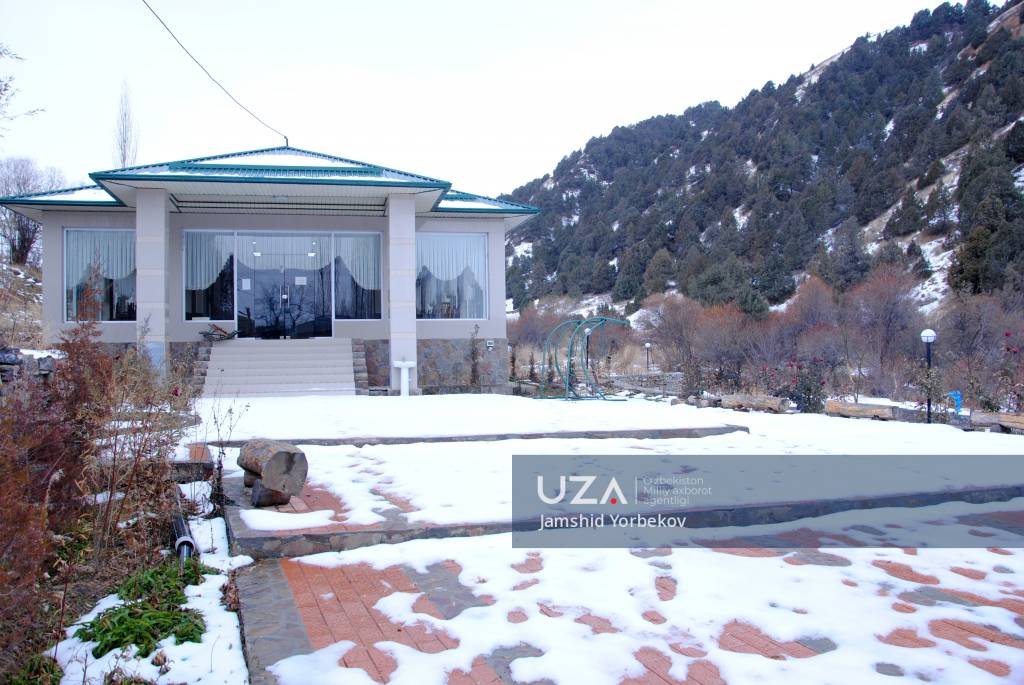 Jizzakh Research Limited Liability Company is implementing an investment project worth 1 billion soums to organize agritourism in the Bakhmal state forestry area of ​​Jizzakh region. As part of the project, a small hotel and a camping complex are being built.

Winter is not the tourist season in the mountainous region. However, preparations for the summer season in the tourist routes of the district have not stopped. Preparations for the reception of tourists in the direction of tourism, established by the limited liability company “Jizzakh Research” are also in full swing. Within the framework of this project, 10 people from the territory of Bakhmal village were provided with permanent jobs.

The results of the great attention paid in recent years to the development of tourism in our country can be seen in Bakhmal district, which is far from the center. The nature of the snow-covered foothills of the Turkestan mountain range may have been more beautiful than before, but tourists did not come. Because a tourist who comes to enjoy the mountain nature needs a road, places to live, eat, and the Internet. Previously, there was no such infrastructure here.

New tourist routes have been established in Bakhmal district. Photo by Jamshid Yorbekov

In accordance with the decrees and decrees of the President on the development of tourism, Bakhmal district is being transformed into one of the tourist areas of the region. In recent years, the work on increasing the tourism potential of the district, the organization of family guest houses, bringing the existing shrines to the required level, the construction of sanitary facilities in the district is being carried out rapidly. With a modern project, infrastructure facilities, modern human settlements are completely changing the look of this mountainous area.

Over the past two years, more than 15 businesses have set up camping and recreation facilities in rural areas worth 12 billion 800 million soums. These facilities have the capacity to accommodate 7,500 holidaymakers during the summer season.

Currently, there is a sanatorium “Bakhmal Ormogohi” for 150 beds in the district. It has the capacity to host 2,250 vacationers this summer.

The resort, which has all the conveniences for vacationers, specializes in the treatment of bronchial asthma, various allergic, diseases of the nervous system and musculoskeletal system. For this purpose, the camp has a salt chamber, phytobochka, physiotherapy, paraffin ozokerite, therapeutic physical training, walking therapy (terrenkur), massage and diet therapy.

The district pays special attention to the development of all areas of tourism, using the opportunities in the region. In particular, practical work is being done to expand pilgrimage tourism. In particular, the reconstruction of the shrines Osmat ota, Novka ota, Sayid Mirkhalilloh, Khoja kondalan, Terakli ota, which are included in the tourist routes of the district, is being carried out.

Road and road infrastructure facilities play an important role in creating convenience for tourists. To this end, roads are also being improved.

According to the Resolution of the President of the Republic of Uzbekistan dated January 9, 2020 “On measures to implement the Investment Program of the Republic of Uzbekistan for 2020-2022” at the expense of the Asian Development Bank “Dashtobod-Zaamin-Bakhmal-Gallaorol.” It is planned to overhaul 106 km of roads, including 39 km in Bakhmal district.

Reconstruction of this road will greatly facilitate the development of domestic tourism in the region, including Bakhmal district.

The increase in the number of recreation areas in Bakhmal is important not only for vacationers, but also for the employment of the population living in the area, improving living standards. To this end, a working group consisting of officials of the Jizzakh Regional Department of Tourism Development, the district administration is working to build guest houses in the villages, to form a culture of tourist service in the population.

The page you requested could not be found. Try refining your search, or use the navigation above to locate the post.